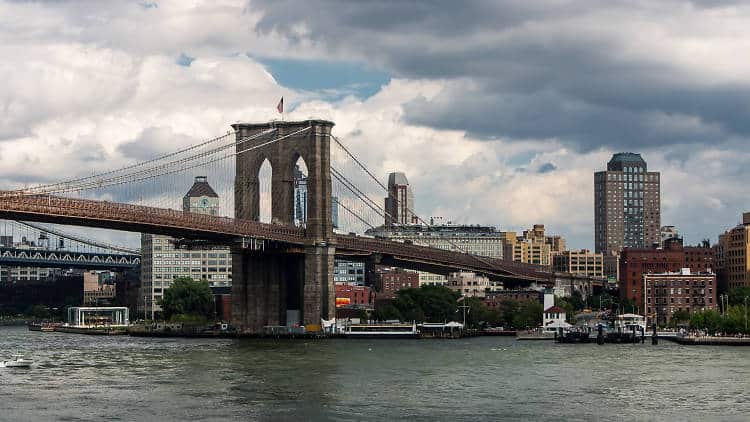 by Joel Meares for TimeOut

In today’s boozy episode of “Did you know,” it turns out there are massive wine cellars under the Brooklyn Bridge. And yes, we do think the City should start drawing up some speakeasy plans, stat.

The cellars—which sit under the 60,000-ton granite entrances to the bridge, one on the Brooklyn end, one at the Manhattan end—haven’t held any barrels of vino since the end of WWII, when the City took them over. But prior to that, they had a storied history of wine cellar-dom.

Why are they there? NPR has traced their history back to the time of the bridge’s construction. The chief bridge engineer, Washington Roebling, was faced with a dilemma: There were two establishments—Rackey’s Wine Company on the Brooklyn shore and liquor providers Luyties & Co on Manhattan—standing in the way of his proposed roadway. In an inspired bit of engineering penny-pinching, Roebling decided to incorporate both into the bridge design. Suddenly the City had two wine cellars and other chambers to be rented out—money that would go to paying off the project.

Wine aficionados take note: Beneath a world famous bridge is a perfect place to store the good stuff. It’s dark, consistently cool (60 degrees) and your kids aren’t going to get into it when you’re away for the weekend.

And, of course, New Yorkers saw what an awesomely novel bar experience the wine cellars could be: The place operated as a kind of speakeasy for New York’s elite for a period after Prohibition, with some lovely decorative touches. From NPR’s report:

“…as the vaults became home to wines from across the globe, the dingy walls of the cellars were enhanced to reflect that heritage. The winding maze of caverns was transformed into a painted “labyrinth”, with the names of French streets—Avenue Les Deux Oefs, Avenue Des Chateux Haut Brion—stenciled overhead.”

From the 1980s to 2001, public artworks group Creative Time held multi-media exhibitions inside the Manhattan anchorage section of the bridge; photos of the Brooklyn side are featured in Stanley Greenberg’s Invisible New York.

← What is Oxidation Doing to My Wine? Hidden Wine Tunnels in Maribor, Slovenia →